Stéphanie Auberville, choreographer, improviser.
In her choreographic work seeks to play with how we look at the world, disrupt our patterns of gaze, and blur norms. She often provokes unusual encounters,  attempts to draw funny and fragile links with what surrounds her. She created various performances as Lost in Candyland, That rings me a bell, Nonobstant. Her last work Salutations Mistinguettes has been shown at the Legs festival in Charleroi danse (Belgium).

By the side of cultural venues, she develops projects in situ for which she occupies venues such as a geriatric hospital, a business bank, or an emergency shelter for homeless people. Her artistic work emerges from the meeting with the venue and with the people who make it live, employees and users, who are often involved in the projects to different degrees.

Since the beginning of the '90s, she is strongly engaged in the practice of improvisation. She performs it and teaches it, organizes encounters. She met teachers as Lisa Nelson, Nancy Stark Smith, Nita Little, Deborah Hay, Simone Forti. 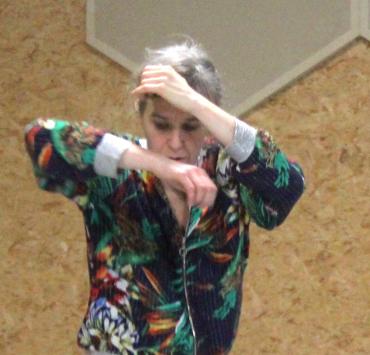