Sébastien Beliah. Bassist and composer based in Paris and Warsaw. His work is mainly focused on improvisation and on his connection with various traditions or writing forms. He embraces as much a historical practice of jazz with the Umlaut Big Bang as the intentional deviation of this practice with Un Poco Loco. For 8 years he co-directed with Pierre-Antoine Badaroux the Ensemble Hodos in which he boldly blends contemporary compositions with his practice as an improviser.
In 2018 he releases his first record for double bass solo entitled “Nocturnes”, a manifesto of a refined mode of playing the double bass and a research of an ascetic form.
He is also fascinated by traditional musics and in particular those of Poland and its nearby countries. From this fascination was born the band Lumpeks, a quartet exploring the traditional melodies from center of Poland (region of Radom) in a contemporary way.

With the band Un Poco Loco they were laureates of the Jazz Migration program of AJC, “Record of the month” Jazz Magazine and twice “selected record” by Citizen Jazz.
With the Umlaut Big Band they were twice “Record prize” of Charles Cros Academy.
With the band Lumpeks they won the Grand Prix “Nowa Tradycja” of the Polish Radio.

Sébastien has a CA of jazz and has taught the double bass, improvisation and jazz at the CRR of Reims from 2006 to 2016. 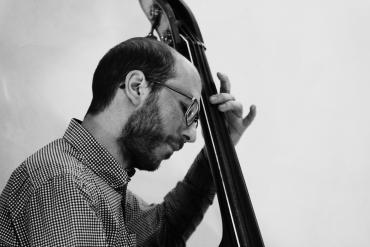