Minyen Hsieh is a highly regarded, award-winning Taiwanese saxophonist. The Taipei native, born in 1981, started to perform professionally at the age of 19, and studied at the Koninklijk Conservatorium in Brussels. His strong improvisation skills and rich tone has made him a coveted player in several genres varying from: jazz, rock, folk, hip-hop, electronic to avant-garde. He won the Taichung Saxophone Competition in 2012, and regularly contributes to various jazz, pop and experimental projects in Taiwan. His first record ”Firry Path" was the best-selling of the year in 2014. His second solo album “A Good As Water” is released in July 2018, Taiwan and Japan.  The collaboration with Tokyo Chuo-Line: “Lines & Stains” has won the ”Best Instrumental Album" of 2019 Golden Melody Award in Taiwan. His electronic-experimental group Non-Confined Space was the winner of “Best Instrumental Album Producer“ of 2020 Golden Melody Award. His latest release work is an acoustic quartet tribute album “Invisible Steps” in 2020. 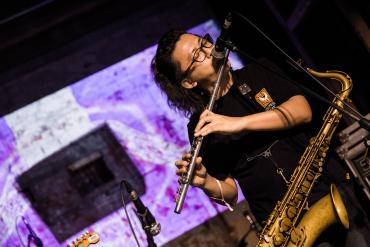