Mehdi Nabti is a celebrated alto saxophonist, flutist, composer, and author who creates improvised polymodal and polyrhythmic music as part of what he calls the “Afro-Berber continuum,” a term of his own invention. He composes and improvises using techniques from the ancient and medieval Berber and sub-Saharan traditions that contain compound adaptations of Sufi trance rhythms and rituals from the Maghreb (Aissawa and Hamadcha) and Afro-Berber and Andalusian melodic modes for a musical evocation of the forgotten and unrecognized history of North Africa and sub-Saharan Africa. These elements are combined with harmonic and improvisational ideas from post-bop jazz and funk. Nabti incorporates ideas from various disciplines into his “Afro-Berber Continuum” from philosophy, symmetry, and epigraphy, but also heroic fantasy and science fiction (particularly uchronies and cybernetics). A quick listen through any release in his catalog, particularly early recordings — 2012's Presentation in Situ with the international octet Nass Lounassa, or 2015's funky electric Artists in Residence with Pulsar 4 — reveal that given his band's instrumentation, and his own reliance on interplay and improvisation, it is easy to classify their music as a hybrid of world fusion and vanguard jazz-funk, though Nabti actively resists that description. 2018's Les Règles de L'Art (Ethno​-​Ingénierie) with his Prototype ensemble, reveals his thinking in a much more concrete and linear way as North African folk melodies and ceremonial chants, and polyharmonic modes entwine with syncopated layers of rhythms and blues, funk, and jazz tropes in an incendiary meld of improvisation and communicative exchange that makes genre classification nearly a moot point. Recognized in Canada for his innovations, Nabti has received numerous grants from the Social Sciences and Humanities Research Council of Canada (SSHRC), the Montreal Arts Council (MAC), the Canada Council for the Arts (CAC) and the Quebec Council of Arts and Letters. (CALQ). 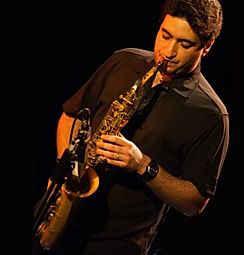