Martin has performed hundreds of concerts over several decades as a jazz and ambient guitarist in duos and quartets.  In his current alias as trubba not he currently performs with and leads the Shunyata Improvisation Group and has released the solo ambient album the Archangel Series.

In the 80’s and early 90’s Martin began as a singer songwriter performing solo and with The Marx Brothers and The Donkin Quartet. In the late 90s and noughties he committed entirely to instrumental jazz playing with Interzone Four and The New Jazz Quartet and in a regular duet with Davy Sax in Jewel (ambient Jazz).

Martin has several recording releases in groups and as trubba not. Martin has performed at the Edinburgh Fringe and shared billings with acts as diverse as The Proclaimers and The Crusaders.

In the last 5 years Martin has recommitted to original music and Free Improvisation playing with the multimedia group Cooking with Three and Shunyata Improvisation Group. Martin currently seeks to develop direct, spacious style seeking to emphasise the natural clarity of the guitar. 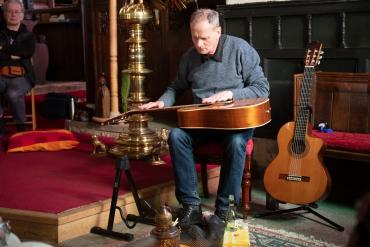