installations in addition to field recordings and soundscapes; professor and researcher at

the Faculty of Education at UFMG and author of the book Walter Smetak, o alquimista dos sons (the sound alchemist) (publisher Perspectiva / SESC, 2008).

He collaborated in 2009, in the setting up of an orchestra formed by musicians who played in the streets of Berlin, as well as co-directed OMNIKESTRA, an orchestra of invented instruments formed in 2015 with the participation of Tom Zé (Sesc Vila Mariana, 2015). He conceived, created and directed the show Villa-Lobos Landscape, held at CPFL Campinas, in March 2009, on the occasion of the 50 years of the composer's death.

In 2013 he performed the sound installation RIO, in partnership with the artist Fernando

Participated with musical pieces or performances from the following festivals: ISIM

He was commissioned artist by the Kunstradio radio in Vienna, to compose the work

Memória do Fogo, in 2015 and also commissioned artist to create a sound installation for the front of the Hellerau theater (Orixás Sonoros, 2016), during the Tonlagen Festival, 2016.

He participated in the MaerzMusik Festival (2017), in Berlin, as curatorial consultant and played Walter Smetak's Sound Plastics, during the festival, at the DAAD Art Gallery in Berlin, alongside Tomomo Adachi, Mazen Kerbaj, Tuzé de Abreu, Silvia Occugne and Chico Mello.

to compose for the Chilean group CEMLA, having composed, in 2017, the song 4

And in 2017 he participated in Documenta 14 (kassel-radio documenta), with the works

He participated in the collective exhibition O Círculo, at Galeria Milan, São Paulo, in 2018, with the works Esù and Oyá.

In August 2019, he participated in the residency and collective exhibition Instrumentes, in Coaty-Salvador, Bahia, with the work Iyabá.

He is the author, along with Julia Gerlach, of the texts present in the book / catalog

He conceived and directed the Film-Partition Anesthesia (2021), inspired by the graphic

composition of the same name by Walter Smetak, with its premiere scheduled for

He is the author of the essay Multimedia Unplugged Prophet-Visionary (2021), launched by BuhRecords.

He is one of the sound artists of the collection Musical Objects, Homage to Walter Smetak (Buh Records, 2021)

Conceived and created the MATA BIO project for the Culturescapes Amazonas 2021 festival alongside Livio Tragtenberg (Switzerland, 2021) 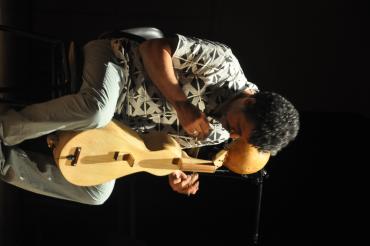