Marco Fiorini is an italian guitarist, improviser and composer living in Copenhagen.

Trying to define himself through uncertainties, he explores the unexpected interactions of sound in space and time using both his guitar, electroacoustic instruments and objects.
As an artist, he is interested in engaging with the audience’s experience of communication, using sound and music as a metalanguage.

In the last years he deepened the study of improvisation, both conducted and non-idiomatic, with Stefano Battaglia, in his Permanent Research Laboratory at Siena Jazz Academy and in Tabula Rasa, at Accademia Chigiana in Siena.

He graduated with the highest grades in Jazz Guitar and Electronic Music at the “G.B. Martini” Conservatory in Bologna and holds a degree in Software Engineering from the Alma Mater Studiorum of Bologna.

Currently, he is enrolled in the Sound and Music Computing Master Program at Aalborg University in Copenhagen and he has been selected as visiting researcher from IRCAM in Paris, where by the end of 2022 he will be working on a project on improvised musical interaction with creative agents, together with double bass player Joëlle Léandre. 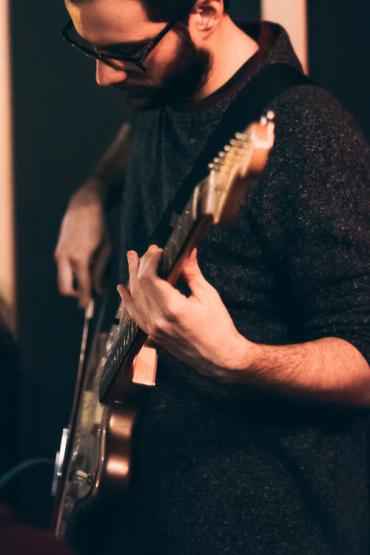