Born in 1961in Palermo . Saxophonist , he has practiced improvised music since early 80's playing with most of the improvisors in the international scene (Europe,Usa,Japan) he has recorded around 80 album under his name and collaborating with artist as Peter Kowald, Gunther Sommer, Fred Frith, Heiner Goebbels Ernst Reijsiger, Jim O'Rourke, Lee Ranaldo, Tatsuhisa Yamamoto,Masaki Iwana, tadashi Endo,Louis Sclavis, Benoit Delbecq, Jean Marc Montera, Audrey Chen, Teresa Wong, Antonello Salis, Alfred Spirli and many many others. He's directing the improvised music label objet-a. Co founder with Lelio Giannetto of the Associazione Curva Minore. Artistic Director of the series Organica in Palermo Italy.

"I think it's important to situate Gianni solo playing in the space coming from the Braxton/Parker at Pisa in the early eighties mould, but just as importantly,from the Sardinian launeddas tradition.

A lot of what he plays comes much more directly from the latter (including the "8 bar modal folk-tune repeated over and over, with unbelievable superimposed variation" that you allude to) Launeddas is always played with circular breathing (they learn by trying to evenly blow bubbles in a glass of water through a straw while breathing through the nose) and they've been doing it a hell of a lot longer than Evan (or Roland Kirk!)."

"Hailing from Sicily, saxophonist Gianni Gebbia has similarly crossed the bridge between traditional and experimental music, conjuring up the launedda, the ancient Sardinian bagpipes,

and propelling it into the new millennium."

"Given the manner in which Anthony Braxton defined recorded improvisation for the alto saxophone on Delmark's seminal For Alto in the late '60s, and then redefined it on Alto Saxophone Improvisations on Arista in the '70s, virtually every saxophonist recording a date of this kind -- whether acknowledging it or not -- owes a great debt to Braxton's pioneering spirit and fluid technique on the instrument. The 17 improvisations that make up Body Limits are most certainly indebted to Braxton but, since Braxton himself felt indebted to Lee Konitz' Lone Lee album, Gianni Gebbia gets to bring the circle to a close around his own playing. Gebbia, whose own lyrical and harmonically inventive playing is a great gift to the Italian jazz scene, wears his influences proudly. Certainly influences like Konitz, Desmond, Hank Mobley, and Cannonball Adderley are more than represented in his melodic style, but sonically, John Cage, Bruno Maderna, Braxton, the early Art Ensemble, and the Revolutionary Jazz Ensemble come to mind. But in his note-for-note playing, altoist Marion Brown comes closer. The warmth in Gebbia's tone and the open-tonal reaching of one microharmony for another without having to bleat through the horn come from Brown. His quiet insistence that -- no matter what -- a note, a rest, and a melody had to be played through to the end is everywhere evident in Gebbia's playing. But Gebbia's melodic and harmonic invention are purely his own; he understands space, time, and the necessity of remaining focused -- check "Amniotico," "Mobius Ring," "Cordelia," or "Monadism" for easy examples. Gebbia has it: the gift to extend what he's learned in order to become who he is. As for everyone else who happens to be listening, they're damn lucky to have recorded evidence of such a great master at work."

The self taught Gebbia’s works touches on the avant guard whilst maintaining a musicality and fluidity with his technique of circular breathing adding an extra element to his playing, the ability to create Reichian like minimalism with a single breath whilst maintaining melodic structure. The multi solo album artist is noted recently for working on the music score of Heiner Goebbels music performance piece ‘Everything that happened and would happen’ at the Manchester international festival and for his curating of the “Anassimandro Festival of Music and Philosophy. 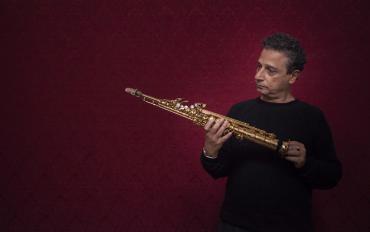