Born in Padua (1985), he began studying piano at 11 and then switched to drums at the age of 13.
His passion for jazz classics led him to tenor saxophone, the instrument with which he is currently developing his musical research, while still experimenting with other instruments such as baritone or soprano saxophone.

During his Bachelor in Jazz Saxophone at Conservatory G. B. Martini of Bologna, he became a member of the Big Band conducted by Massimo Morganti and later by Michele Corcella.
In 2015 he took part in “Sonic Genome”, a performance ideated by Anthony Braxton. Here he had the opportunity to spend four days with the musician and composer, and to perform live inside the Egyptian Museum in Turin during the Turin Jazz Festival. Thanks to this encounter he got closer to composition, especially to the world of impromptu. Meanwhile he continued to deepen his work by playing with Fonterossa Orchestra, conducted by Silvia Bolognesi, which recently performed during Metastasio Jazz and was later broadcasted on Rai Radio 3.
Francesco joined various formations and became part of the Blue Ring Improvisers Collective and of Doom Orchestra.

He worked together with artists from the electronic music scene such as Francesco Giomi for his project “Back to the Silence”. He joined the masterclasses of various artists: Elio Martusciello, Roberto Dani, Fabrizio Puglisi, Joelle Lenadre, Claudio Fasoli, Enrico Rava, Barre Phillips, Tim Berne, Stefano Battaglia e Giovanni Mancuso.
Getting acquainted with Joelle Lenadre, Giancarlo Schiaffini and Silvia Bolognesi had a deep influence on his experimental approach moving aside from jazz. His research is driven by the will to be freed from static schemes and instead heads towards a universality made of explorations of silence combined with his diverse musical influences as well as his passion for nature, a source of inspiration around which he aims to articulate his sonic texture. 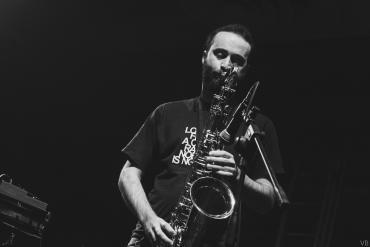