Cellist Elisabeth Coudoux, born in 1985, came from classical instrumental studies via Jazz to New Music and free improvisation in her search after new sounds and playing techniques. For her, exploring the instrument’s sound range is a constant broadening search for her own voice. Poetic miniatures emerge while analysing intui-tive movement patterns, noisy stories are told, and unknown soundscapes explored.

As a solo artist, she loves the challenge of spontaneous encounters. She has played with Michael Zerang, Mark Dresser, Biliana Voutchkova, Mick Beck, Sandra Weiss, Xavier Charles, Marcus Schmickler, among others. In her own ensemble Emiszatett, founded in 2013, the cello resonates as an orchestral sound body on equal footing with the other players’ sound, the focus always shifting between individual expression and free collective energy. What needs to be negotiated is that balance between improvising idiosyncrasy and a common musical form. Coudoux plays at festivals and concert series all over the world, such as All Ears Festival, In a Landscape, Moers Festival, Roskilde Festival, Krakow Jazz Autumn, Drei Tage Zeit, Météo Festival, Dara String Festival and many more. She is a member of several ensembles and projects such as Zeitkratzer, Cloud Chamber, Peter Evans Köln Quartett. She is a NICA participant as well as initiator and long-time IMPAKT e.V. board member.

On May 15th the new album »EARIS« will be released, a collaboration of her ensemble Emiszatett with Pegelia Gold. The music of the album is a new idea, grown from many years of listening and playing experience of the ensemble, to realize compositions and concepts with voice, telling their own fantasy in musical landscapes. 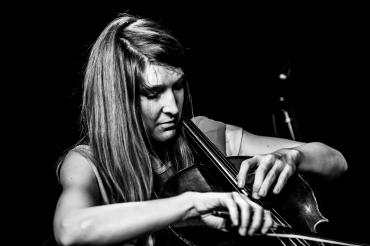