ARTISTIC PRACTICE
Alberto Novello a.k.a. JesterN’s practice repurposes found or decontextualized analogue devices to investigate the connections between light and sound in the form of contemplative installations and performances. He repairs and modifies tools from our analogue past: oscilloscopes, early game consoles, analogue video mixers, and lasers. He is attracted to their intrinsic limitations and strong ‘personalities’: fluid beam movement, vivid colors, infinite resolution, absence of frame rate, and line aesthetics. By using these forgotten devices, he exposes the public to the aesthetic differences between the ubiquitous digital projections and the vibrance of analogue beams, engaging them to reflect on the sociopolitical impact of technology in a retrospective on technologisation: what ‘old’ means, and what value the ‘new’ really adds.
Resurrect the technology from the past to create the aesthetic of the future!

COMPETENCES
He graduated in Nuclear Physics at the University of Trieste, completed the master Art Science Technologies with Jean Claude Risset, obtained a PhD degree at the Technische Universiteit Eindhoven with Armin Kohlrausch, and graduated in Electronic Music at the Institute of Sonology, Royal Conservatory of Den Haag.
He worked for Texas Instruments, Philips Research, and Auro Technologies creating software for their audio applications.

ACADEMIC POSITION
He is currently teacher of Electronic Music at the Conservatory of Padua.
He is coordinator of the SaMPL, Performance Art Center in Padua. 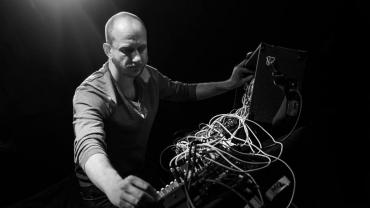