With solid training as a classical musician, Sophie Angel took a close interest in modern jazz before committing in the early Nineties to the shifting, deliciously uncertain ground of free improvisation, thanks to her fascination for the powers of expression displayed by a few great keyboard-heretics such as Keith Tippett, Fred Van Hove or Christine Wodrascka.

Taking a look through the prism of improvised music, Sophie Agnel began reworking the prepared piano techniques imagined by John Cage in the field of contemporary music, and from that point she would busy herself "introducing the prosaicism of the contemporary world into the belly of western musical refinement itself", and transform her instrument into a sort of “extensive prep-piano” or “extended piano”, thereby laying the foundations of a radically materialist personal universe that is by turns lyrical, abstract and sensualist.

Moving from the demanding exercise of playing solo to multiple encounters with some of the greatest masters of contemporary improvisation in their original surroundings — Michel Doneda, Daunik Lazro, Olivier Benoit, Catherine Jauniaux, Eric M, Roger Turner, Phil Minton — the pianist would also gradually venture into those border-zones where genres fade into the distance… Sophie Agnel has also produced a few of her own shows for general audiences such as: Le Piano-Marteau, which staged the sound-space in a subtle game of mirrors; a collaboration with choreographer Josef Nadj (Etc. etc.); and also the music she composed for the stage-adaptation of Charles Reznikov's Testimony directed by Henri Jules Julien.

Sophie Agnel's interest in concrete and electro-acoustic music and phenomena in the spatial quality of sounds has recently led her, together with instrument-maker Laurent Paquier and the Tarn-based GMEA ["Albi Electro-Acoustic Music Group"], to conceive the experimental electro-acoustic instrument known as the “nOpianO/cordophone” which opens new sound-horizons even further. 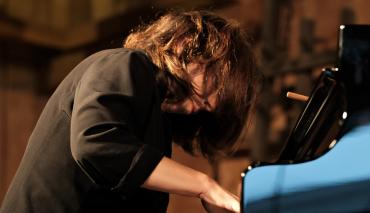