Sébastien plays soprano, tenor and C-melody saxophones. He got started with improvisation through workshops with musicians coming from contemporary jazz or improvised music.
Interested in perceptive phenomenons, he works mainly with sound as a material, describing himself as a “sound crafter” for an audience to listen to. His praxis also extends to body and space, as he regularly confronts it to contemporary dance.
He plays in the saxophone duet Relentless with Artur Vidal, in duet with viola player Cyprien Busolini or electronics musician Miguel A. Garcia, in large orchestra with IMO, and regularly meets other artists, either for private sessions or performances. He also works on solo performances with tenor sax on a stand and electronics (Lignes) or ambisonics (Lignes de niveaux) or soprano saxophone and water (saxopH2One).
His interests also extend to Soundart, as he collaborates with photographer Diane Martinot, aiming to mix sound and light in various ways or working together on installation pieces.
He has played around Europe in various venues and festivals, for concerts, dance performances or soundwalks.
Sébastien taught Mathematics in high school and also gave a workshop about soundscapes there. Since April 2015, he lives in Leipzig and dedicates his time to Shiatsu and Music. After organizing concerts in an off-space since 2016, he founded the association LeipziXP in 2018, organising a festival to foster the experimental music local scene, and from 2020 a concert series. 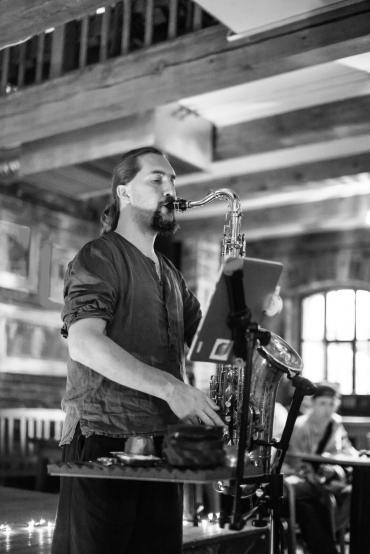