Born in Bari (Italy), in 1982 he was propelled onto the international scene by Luciano Berio, as the foremost interpreter of his Sequenza V, and later as soloist in Ofanim (Saint-Paul-de-Vence, '88), Albumblatt (Köln, '92) and Outis (Teatro alla Scala, 1996).

In 1989 Sylvano Bussotti invited him for the realization of the musical film Biennale Apollo (Biennele di Venezia), and dedicated to him Averla e Grifone, for solo trombone (La Spezia, '87; last version, Los Angeles, '91).

Dedicated to him is then Scaglie (Montescaglioso, It., '92) by Franco Donatoni, who entrusted to him the first performance of Sweet Basil (Strasbourg 93), for trombone and big band, and Respiro (Rotterdam, '89), by Luca Francesconi; Azio Corghi has written for him and The Swingle Singers the scene music for La Piovana by Ruzzante, from which he has extracted Intermedi e Canzoni for solo trombone (Verona '86); Giacomo Manzoni dedicated to him Duplum and has written for him the scene music for Commedia dell'Inferno by E. Sanguineti (Ravenna Festival 95). Aldo Clementi has written for him Berceuse III, for 12 winds and "trombone obbligato" and Texture (Roma, 2005), for trombone and tape.
To report, as an important contribution to the emancipation of the trombone as a soloistic instrument, the works dedicated to him by Armando Gentilucci, Giorgio Gaslini, Marcello Panni, Virgilio Mortari, Misha Mengelberg, Diderik Wagenaar, Aurelio Samorì, Giancarlo Cardini, Mauro Bortolotti, Fabrizio de Rossi Re, Fabio Cifariello Ciardi, Riccardo Piacentini, Agostino Di Scipio, Antonio De Lisa, Francesco Scagliola, Franco Degrassi, Giorgio Tedde, Vito Palumbo, Gianluca Verlingieri, Stefano Bassanese.

In the field of improvised music, it is worth mentioning his participation in the historic "Nuova Consonanza improvisation group" 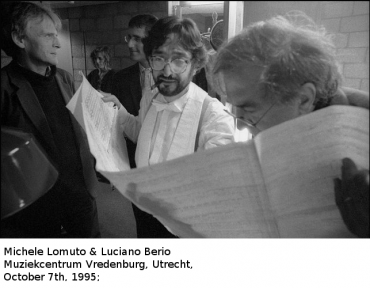