Joana Guerra is a cellist, singer and composer from Lisbon, Portugal, whose distinct passion for experimentation and adventure lead her to regular collaborations with innumerous musicians in different genres and with projects in dance, performance, cinema and theater, influencing and enriching her ever-expanding universe. In 2011, she started her solo project for cello and voice. In 2016, with her second album “Cavalos Vapor” she reached a wider audience and was confirmed as one of the most interesting artists of the new generation of portuguese musicians. 2020 sees the release of her fourth album “Chão Vermelho” on Miasmah Recordings, having been acclaimed by national and international critics.

Joana Guerra also collaborates intensively on several projects of experimental music, improvisation, noise, rock or free jazz. Currently she is a member of the portuguese sextet Lantana, The Alvaret Ensemble, the duet with the violinist Gil Dionísio, Ela É Uma Banda, the trio Preto Mate with Ricardo Jacinto and Pedro Melo Alves, the heavy psych band Asimov and The Hidden Circus. In addition to other collaborations with Pop Dell’Arte, Surma, Gume, Joelle Léandre, Tiago Sousa, Noise Orchestra, Cícero, among others. 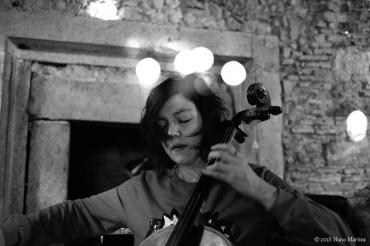