Reviews
"..we discover a guitarist who plays the acoustic wonderfully, working to crystallise the moods conjured by the techniques being used: atonality, complex melodic lines and, in the tradition of the contemporary guitarist, fast runs around the fingerboard, a search for counterpoint, dramatically placed glissandi, an exploration of sounds at the bridge, etc. Strange Memories is part of that category of works that marvellously exploit the technical and emotional characteristics of the instrument"
Review of the album Strange Memories by Ettore Garzia for Percorsi Musicali

"To describe Gargaud as some sort of “incredible one-man string band” is no exaggeration. Albeit that he ignores explicit references to well-defined styles and any narcissistic riff. In short, a "guitar pendulum" in the best improvisation tradition. Especially for fans of Dirk Serries." Review by Georges Tonla Briquet For Jazz'Halo

(...) In fact, "Here" is a goddamn rock, a reference-point, but with sparkly highlights, markers pointing out away ahead. "Here" is your tying together of several cosmic threads of music history: combine Fennesz- slash-Hecker-school guitar+electronic sonics, the deep-space electronica of Biosphere, the European Free Improv tradition of Derek Bailey's guitar-playing, and the propulsive benzodiazepine blur of über-minimal dubtechno wizard-like Basic Channel or Wolfgang Voigt's Gas project, the seminal tonal tape+guitar forays of Fripp & Eno, somehow... and it starts to look more like a rare-earth element that turned up for the first time last week in the guts of a meteorite. (...)
Foxy digitalis writing by Stephen Clove from New Zealand.

(...) Guillaume Gargaud has created an essential piece of music for the electronic avantgarde, a masterwork that ranks alongside Fennesz’s Black Sea in regards to its sophistication, attention to detail, influence and brilliance. While being an electronic record, it also stands as a beautiful solo guitar record, recalling elements of Steffen Basho Junghans or Nick Drake (...)
Groovenime reviewed by Neil Levens 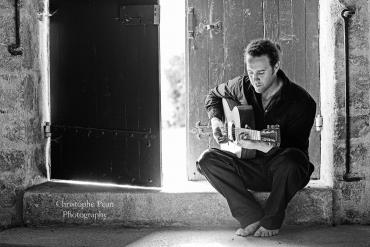