Pianist, Keyboardist, Composer and Producer, Florian LAPORTA is a very creative and versatile musician. He has performed original music and improvisation on various projects, performing as solo artist or with one of his bands.
Florian's music is a reflection of his many humans, musical experiences and travels.

Born in 1968 Florian LAPORTA first contact with music is at 5 in a school of music for children. At 6 he moved with family to Buenos Aires (Argentina) for 4 years. Florian was then exposed to South American music like Tango, Indian music and lot of north America music like Jazz, Rock, Hard Rock. Came back to France at 10 and really musical education, he attended solfa, singing, trombone and saxophone lessons at a local music school. Florian subsequently focussed on classical piano with a personal teacher graduate from BALE music school. His teacher quickly understood he was attracted by jazz and blues and she had Florian working really hard on classical and jazz music & harmony. Florian is really greatfull for that. Showing him harmony bridges beetwen classical (DEBUSSY, RAVEL, COPELAND), Blues and Jazz...

He started composing first pieces for piano and I knew that music will be forever part of his life. I was 15 when I started playing saxophone and keyboards in a (big) band, a choral with 100 singers, 30 musicians. It was the first studio session recording a musical comedie and beginning touring.

Following year, another studio experience with the recording of a single next year came keyboards studio session in Paris with his brother’s band "COVERS BOYS".
Florian later moved to Lyon (France) to work in theatre as sound engineer.
In 1992 he moved to south of France to work as free lance sound engineer and joined "D-SIDERS" as keyboard player.
In 1995, Florian was hired by the Opera National de Lyon as Sound engineer & Ballet sound engineer.The next 4 years he had to put aside his own musical activity because he was on the road 4 months per year with BALLET. Hard work but enriching experience working with famous choregraphers, dansers, musical directors, and singers.

Joining IGNEM in 2001. SYMBIOSYS, the first recording cd of the band get out the recording studio in 2005 (IGNEM / Symbiosys). 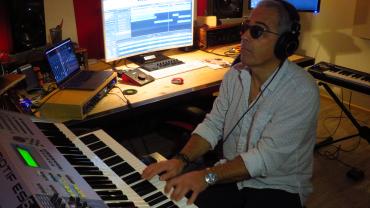